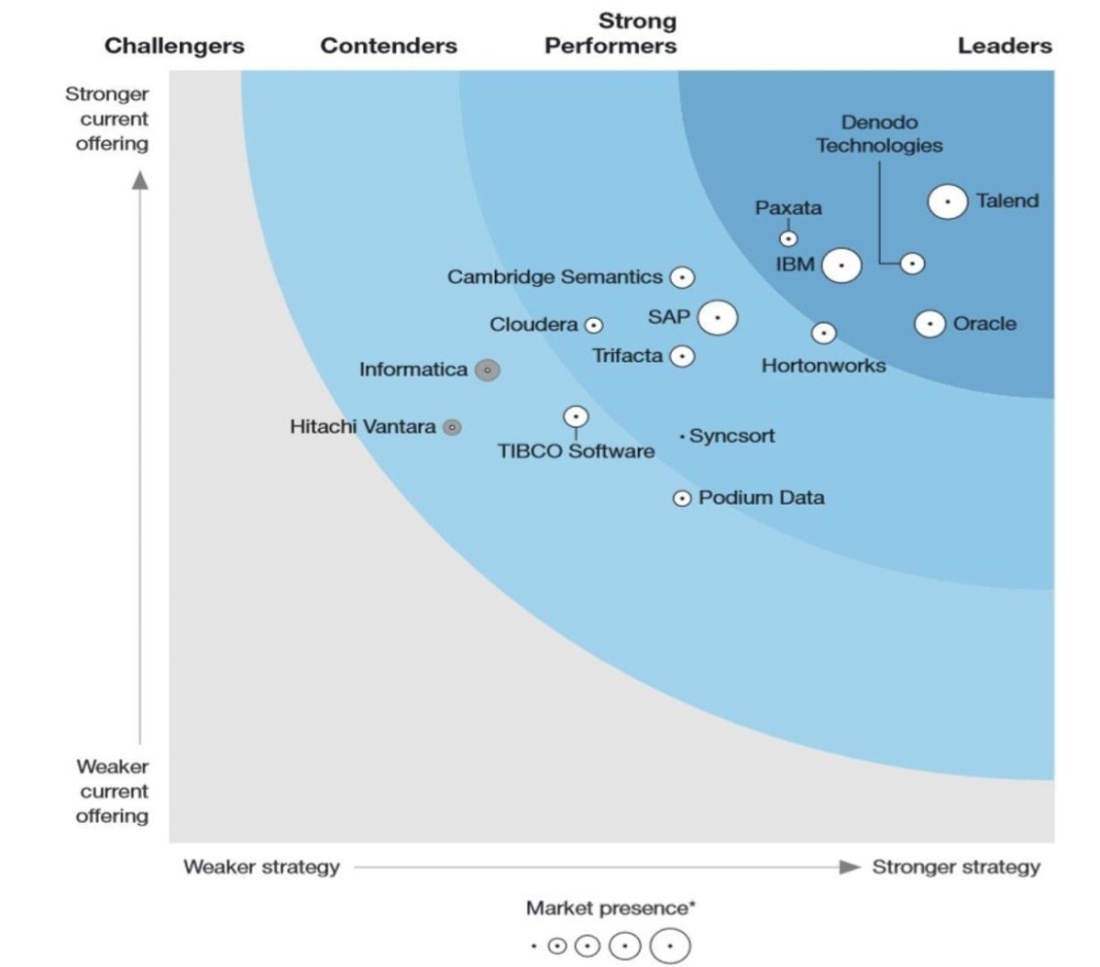 I have written about analyst reports in the past. Last week I read about the The Forrester Wave™: Big Data Fabric, Q2 2018. A few months ago I wrote a 5 part series about Big Data Platforms. Apparently platforms like Cloudera an Hortonworks do not run the show according to this analysis report.

According to Forrester, a Big Data Fabric is an emerging platform which accelerates business insights; “by automating ingestion, curation, discovery, preparation and integration from data silos”. It can support many types of use cases. The top big data fabric use cases Forrester has seen are:

Forrester has included the following companies (Cambridge Semantics, Cloudera, Denodo Technologies, Hitachi Vantara, Hortonworks, IBM, Informatica, Oracle, Paxata, Podium Data, SAP, Syncsort, Talend, TIBCO Software, and Trifacta) into the report, based on a few inclusion criteria. The most important ones are the functionality of the offering and (of course) Cloud. The offering must be able to offer the following functionality:

Of course the solution;

Oracle’s key strengths lie in its security & governance capabilities, highly scalable data movement, and transformations that can be done in real-time streaming environments. Forrester says, Oracle’s customers use the Big Data Fabric to support the various use cases, like real-time analytics, customer intelligence, IoT applications, and other Big Data applications and insights.

In a presentation I did at the UKOUG and the nlOUG last year, I uncovered some parts of the Oracle Big Data (Cloud) offering.

The following Oracle products are included in the report:

Find out what some of the other vendors have to say about the report:

Of course this report is only a view from one analyst. You should check what the Gartners of this world have to say to get a completer picture.

This last week I have been taking a slightly closer look at 3 of the most well known Big Data Platform Distributions; Cloudera, MapR and Hortonworks. It’s interesting to see how different de various distributions look at the same data challenge.

Which Big Data Platform Distributions is the best?

The three different Big Data Platform Distributions have a different focus. Here are a few things that make each of the top three vendors stand out from each other:

There is no easy answer to the question; “Which Big Data Platform Distributions is the best?”. My answer would be; “It depends”. It depends on a various different factors:

Back to the question; “Which Big Data Platform Distributions is the best?”. Go ahead and find out for yourself. Determine which of the points above are important to your situation and try it out for your self.

If you have anything to contribute, please let me know. I haven’t performed a thorough comparison, yet. Maybe Gartner can help out a bit as well.

As part of the Big Data Platform Distributions week, I will have a closer look at the Hortonworks distribution.

Hortonworks was founded in 2011 when 24 engineers from the original Hadoop team at Yahoo! formed Hortonworks. This included the founders Rob Bearden, Alan Gates, Arun Murthy, Devaraj Das, Mahadev Konar, Owen O’Malley, Sanjay Radia, and Suresh Srinivas. The name Hortonworks refers to Horton the Elephant, which relates to the naming of Hadoop.

“The only way to deliver infrastructure platform technology is completely in open source.”

The Hortonworks solution aims to offer an platform to be able to process and store data-in-motion as well as data-at-rest. This platform is a combination of Hortonworks Data Flow (HDF™) and Hortonworks Data Platforms (HDP®). This way Hortonworks is not only about doing Hadoop (HDP), but it is also connecting data platforms via HDF.

Since the birth of Hortonworks they have had a fundamental belief: “The only way to deliver infrastructure platform technology is completely in open source.” Hortonworks is  also member of the Open Data Platform Initiative; “A nonprofit organization committed to simplification & standardization of the Big Data ecosystem with common reference specifications and test suites” 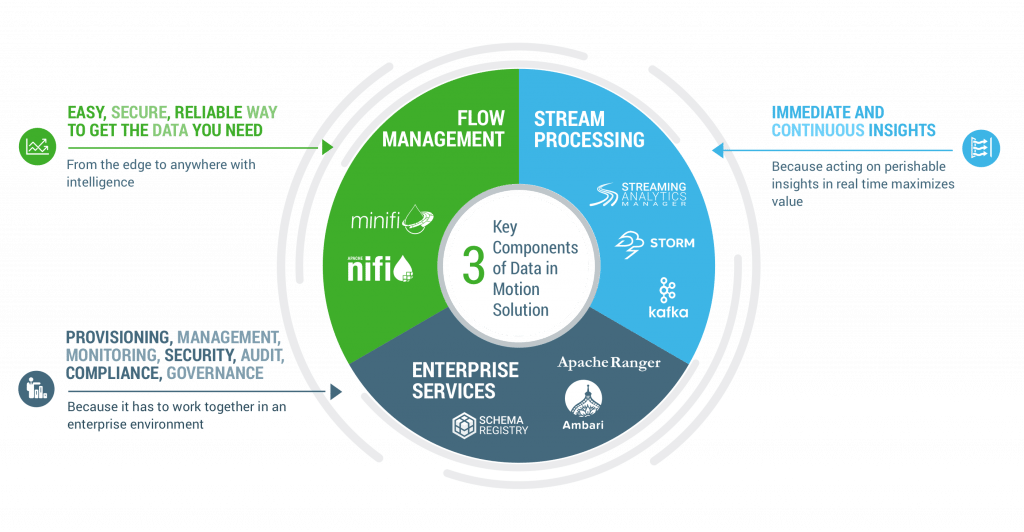 Streaming Analytics Manager and Schema Registry are both open source projects. Until this moment they are not part of the Apache Software Foundation project.

Hortonworks is also available in the cloud with two specific products:

The best way to get to know the Hortonworks product(s) is by getting your hands dirty. Hortonworks offers Sandboxes on a VM for both HDP as well as HDF. These VM’s come in different flavours, like VMWare, VirtualBox and Docker. Go and download a copy here. For questions and other interactions go to the Hortonworks community.

As part of the Big Data Platform Distributions week, I will have a closer look at the MapR distribution.

John Schroeder founded MapR in 2009 and served as the company’s CEO until 2016. 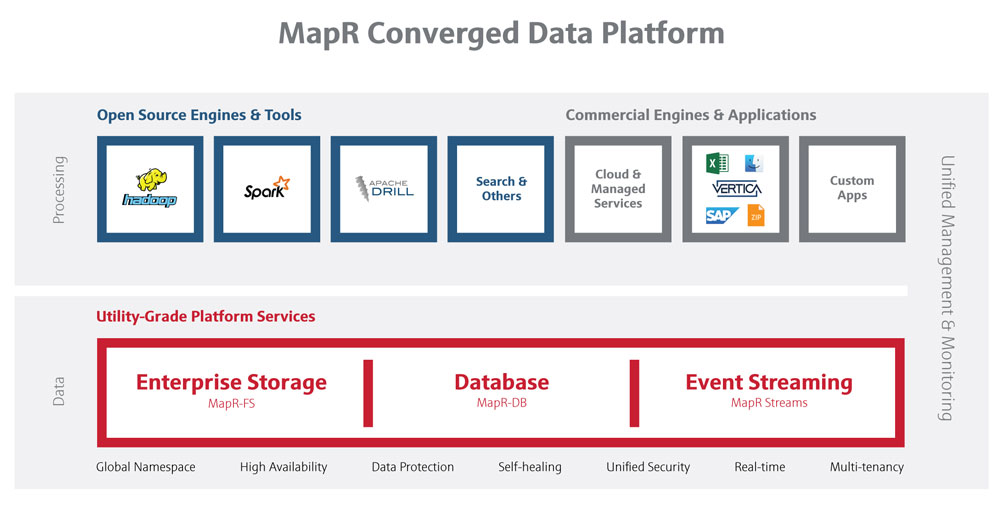 It’s incorrect to think of the MapR CDP as proprietary. Of course the MapR CDP is powered by three platform services:

Central in the MapR philosophy is ‘Convergence’. I do not know the exact definition of ‘Convergence’ but in the MapR context it’s all about; “integrating Data-in-Motion & Data-at-Rest to support real-time applications”. Since the end of 2016 MapR supports this philosophy by using Event-Driven Micro-services. The idea behind these Micro-services (combined with specific API’s) is that they unify all kinds of data (structured, semi-structured and un-structured) as well as streaming & event data. These Micro-services are designed in such a way that they remove complexity and enhance several tasks.

To get the most out of the CDP and to speed up the process, MapR is delivering a Converged Application Blueprint to get things started. This blueprint includes:

The Converged Data Platform is the flagship product within MapR. Other products include:

There is are a few areas where MapR and Oracle have a connection. One is via the Oracle Cloud Marketplace. This enables Oracle Cloud customers to use MapR in the Oracle Cloud. Oracle Data Integrator, being open and heterogenous, seems to integrate with MapR very well. Check out Issam Hijazi’s findings.

The best way to get to know the MapR product(s) is by getting your hands dirty. Try MapR and download a Sandbox. For questions and other interactions go to the MapR community.

As part of the Big Data Platform Distributions week, I will have a closer look at the Cloudera distribution.

Cloudera was founded in 2008 by a few people out of the Silicon Valley atmosphere:

Also Doug Cutting, co-creator of Hadoop, joined the company in 2009 as Chief Architect He still is active in  that role.

Cloudera offers an architecture which serves as an Enterprise Data Hub (EDH). The Hadoop platform serves as a central data repository. As opposed to traditional data management systems, data is not transferred (ETL / E-LT) from A to B. The data is ingested and stored on the EDH and processed, analysed and served where the data resides on the data platform.

The core of the Cloudera Distribution is based on Apache™ Hadoop® open-source project. These projects include projects like Impala, Kudu and Sentry, which are created inside Cloudera and returned back to the open-source community.

One product which sets Cloudera apart from the other distributions is the Cloudera Manager (CM). According to Cloudera, the Cloudera Manager is the best way to install, configure, manage, and monitor the Apache Hadoop stack. People will argue that CM is the best option because there is also Apache Ambari, which is open-source. I won’t go into details which one is better. As for a lot of things the answer would be; it depends. From what I hear and read, Cloudera Manager should be a must have for administrators, because of it’s rich functionalities. A downside of CM is that it is a proprietary product and therefore cannot benefit from the innovations from the community. That doesn’t necessarily mean that open-source projects are more open than proprietary software, because they are only used for a specific distribution.

The Enterprise Data Hub is the flagship product within Cloudera. Other products include:

As the leader in Apache Hadoop-based data platforms, Cloudera has the enterprise quality and expertise that make them the right choice to work with on Oracle Big Data Appliance.
— Andy Mendelson, Senior Vice President, Oracle Server Technologies

Oracle has taken the don’t DIY philosophy one step further. They have created the Oracle Big Data Appliance (BDA) of which the recently announced the latest and 6th hardware generation of the BDA, which is now generally available.

Check out more about the collaboration between Cloudera and Oracle here.

“Oracle, Intel, and Cloudera partner to co-engineer integrated hardware and software into the Oracle Big Data Appliance, an engineered system designed to provide high performance and scalable data processing environment for Big Data.” See the video for the interview.

The best way to get to know the Cloudera product(s) is by getting your hands dirty. Cloudera offers Quickstart Virtual images (VM). These VM’s come in different flavours, like VMWare, VirtualBox and Docker. Go and download a copy for the current 5.12 version here. For questions and other interactions go to the Cloudera community.